Back to Highlights of Thailand's Beaches

Koh Tao is located in the Gulf of Thailand north of Koh Samui and Koh Phangan. The island gained the name Koh Tao, which means Turtle Island, due to the fact that the waters in the area were at one time rich with sea turtles. Unfortunately these days the turtles have moved on to other breeding grounds, and you would be lucky to see one, but the island does still have abundant marine life in its surrounding waters which draw in visitors.

Initially Koh Tao was uninhabited and only occasional fishermen, looking for shelter, visited the island. However on 18 June 1899, His Majesty the King Chulalongkorn (Rama V 1868-1910) visited Koh Tao leaving as evidence his monogram on a huge boulder at Jor Por Ror Bay, next to Sairee Beach. Since that date people became aware of Koh Tao and gradually it attracted fishermen and coconut farmers to its shores.

When tourism took off in Koh Samui divers used to come to Koh Tao for the excellent diving and a series of small guest houses and hotels sprung up. Although there has been significant development since those early days, Koh Tao is still a very laid back island with a unique appeal to those wishing to escape the hustle and bustle of bigger islands and those keen to dives in its clear waters.

Our Hotels in Koh Tao 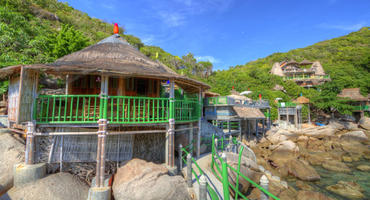