The Temples of Angkor

Back to Highlights of Northern Cambodia

The temples of Angkor, just a few miles north of Siem Reap, are without doubt the most famous, most enormous, most impressive and most important attraction not only in Cambodia but possibly in the whole of Southeast Asia. It is not until you actually get amongst the ruins themselves that you really appreciate the scale of the entire temple complex that includes the iconic Angkor Wat. The temples were built between the 9th and 14th centuries by a succession of god-kings and consist of 100 or so religious monuments that formed the heart of the ancient Khmer civilisation. The heights of sophistication reached by the Khmers can only be guessed at but there is no doubt that the temples of Angkor are the legacy of a highly developed society. From the 15th century the temples were abandoned, forgotten by the world until their rediscovery in 1861 by French naturalist Henri Mouhot.

The scale and beauty of Angkor Wat is bound to amaze the first time visitor and the 200 smiling faces at the Bayon will leave a lasting impression on all that are lucky enough to see them. As well as the major temple complex, in and around Angkor Wat, there are smaller, but no less dramatic, temples that were ‘lost’ to the jungle and still have huge banyan trees growing through the middle of their former royal buildings.

Angkor is undoubtedly one of the finest archaeological sites in the world and as such attracts a large number of visitors each year. However we can plan your itinerary so that you avoid the crowds wherever possible and make the most of this unmissable attraction.

How long you stay in Siem Reap depends on how much you wish to see at Angkor. Ideally you should stay at least 3 nights in the region to see the most important temples which are Angkor Wat, Angkor Thom, The Bayon, Preah Khan and Ta Phrom. You may also wish to see some of the smaller outlying temples which receive less visitors.

Experiences to Inspire in The Temples of Angkor 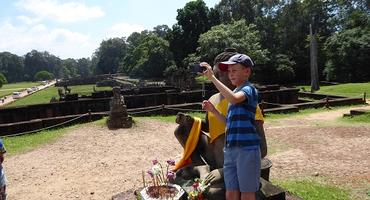 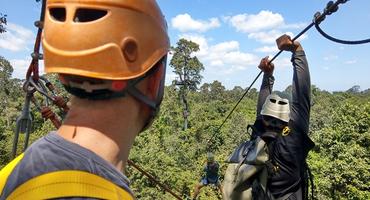 Zip-Lining at Angkor
The Temples of Angkor
Family Friendly, Outdoor Activities
Back to Top