Back to Highlights of Central Myanmar

Towering over its surrounding landscape, Mount Popa is often referred to as Myanmar’s Mount Olympus and is just a two hour drive from Bagan. A truly amazing spectacle Mount Popa, meaning ‘flower’ in Sanskrit, is an extinct volcano set amid beautiful hills. A climb up Mount Popa, passing local monkeys on the way, is worth it for the great views and to explore the charming temple perched at the top. It is the most significant place in the country for Nat spirit worship (see below) and has been so for over 700 years.

Before Buddhism arrived in Myanmar the indigenous religion was that of Nat worship. Nat worship was essentially animistic in origin and initially was associated with the spirits in natural features. The religion developed over the years to include the worship of the spirits of actual people who died had for a particular cause or were unjustly treated during their lives.

When King Anawratha converted to Buddhism he wanted the country to follow suit and he sought to banish worship of the Nats, in favour of Buddhism. The destruction of their Nat shrines turned the people away from Buddhism and on seeing this the king relented and permitted the Nat religion to continue. At the time there were 36 human Nats, deemed the most important spirits, and King Anawratha created a 37th who was to be king of them all. As this new Nat was Thagyamin, a Hindu deity who paid homage to Buddha effectively he was saying that the Nats should be subordinate to Buddhism. The people accepted this and hence despite the widespread adoption of Buddhism both religions have managed to co-exist.

The Nat religion is full of fables, interesting shrines and some amazing festivals and if you would like to find out more about the religion and how it affects the lives of the Burmese, you should visit Mount Popa, the spiritual home of the Nats. You may also like to see one of their festivals and one of the best takes place in August at Taung Pyone, a small village situated about 12 miles north of Mandalay.

Our Hotels in Mount Popa 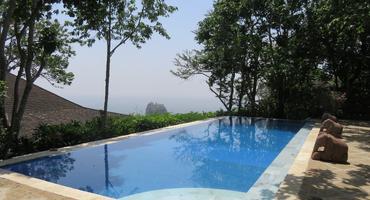