When to visit - Taiwan

What is the best time of year to visit Taiwan?

What is the best time of year to visit Taiwan?

The best months of the year for a holiday in Taiwan are the months of October and November. Relatively low rainfall, clear skies and manageable temperatures are all factors which make this an excellent time to visit. Another benefit of visiting in these two months is that, after the rainy season, humidity is at an annual low making the climate very pleasant and easy to travel in.

What are good months to be in Taiwan?

What are good months to be in Taiwan?

The months between March and May, as well as December are good months to visit Taiwan, with temperatures being warm with clear skies and low humidity. However, with monsoon fast approaching this period does experience some rain.

When is the rainy season in Taiwan?

When is the rainy season in Taiwan?

The rainy season in Taiwan runs between June and September and, relative to some other Asian nations, does not see a huge amount of rainfall. With this in mind it is certainly possible to visit during this time but be prepared for rainy days and extremely humid conditions.

See our full range of travel experiences in Taiwan.

The weather in Taipei at the beginning of the year is pleasant with average temperatures of around 16°C in January rising to 22°C in April. This pleasant temperature is accompanied by one of the clearest, and least humid, times of year in Taipei. Rainfall is a year wide occurrence in Taiwan however the months of January and February have some of the lowest rainfall of the year. Rainfall does increase slightly as the year moves into March and April however this is still an insignificant amount when compared to the rainy season through the summer months.

This period is dominated by heavy rainfall and high levels of cloud cover; however rainfall during the rainy season in Taiwan is not as bad as some of the other nations in the region and should not deter you from travelling if these are the only months you can visit.  Temperatures during this period peak in July with an average of 30°C before dropping to around 27°C in September.  Although these temperatures sound manageable by Asian standards high levels of humidity can make the perceived temperature to feel significantly hotter!

With the rainy season in Taipei over, this period enjoys cooler weather with averages ranging from 24°C in October to 18°C in December. Alongside this drop in temperature, humidity levels also substantially decrease to negligible levels making days much less muggy and far more manageable for travelling. October can see the odd Typhoon pass through Taiwan, but generally speaking it is a great month to visit. November and December are the driest months of the year as well as also being the windiest – a great combination if you are keen to head over to the Penghu Islands for some wind-surfing. 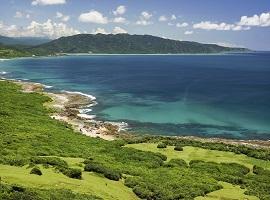