The west of Bhutan is the traditional gateway to the rest of the country as the only international airport is situated at Paro and the capital of Thimphu is close by. It is a popular part of Bhutan as it is home to some of the country's most famous landmarks, such as Tiger's Nest Monastery, and also some of its most colourful, and famous, festivals which take place at Paro (Spring) and Thimphu (Autumn). Add to that other historic destinations such as Punakha and the wonderfully scenic Phobjikha Valley, as well as some great opportunities for trekking towards the sacred peak of Jhomolhari, and you can understand why the west of Bhutan is one of the most important areas for cultural tourism in the Himalaya region.

Back to All Regions of Bhutan 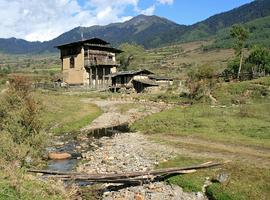 Gangtey
Gangtey sits at a height of 2900m and acts as gateway to the famous Phobjikha Valley, thus enjoying great sweeping views of the valley from its promontory position. This sleepy town, a few hours drive from Wangdi, or 5 hours from Bumthang, is dominated by the ancient Gangtey Goemba, a monastery that was founded in 1613 but has recently been restored after earthquake damage. 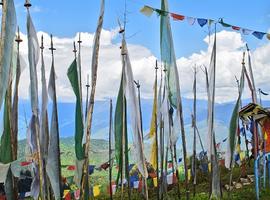 Haa
The small town of Haa can be found in a valley of the same name a few hours drive southwest of Paro, and reached by crossing the Cheli La Pass which sits at 3810m. From the top of the pass there are great views of Paro on one side and the Haa Valley on the other. 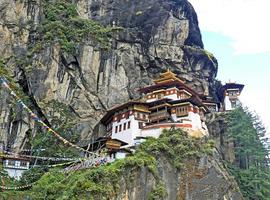 Paro
Paro is home to Bhutan's only international airport, and a large army garrison, but this belies the fact that Paro is actually a very charming town spread along a wonderfully scenic valley with a bubbling river coursing through its middle. 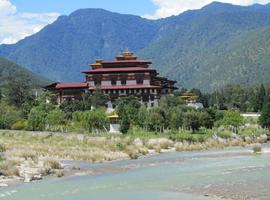 Punakha
The charming region of Punakha is home to one of the most beautiful dzongs in Bhutan. It can be reached by a scenic 3 hour drive from Thimphu after you have crossed over the Dochu La Pass where, if you are lucky, you can get a view of the Himalaya mountains that form the northern border of Bhutan. 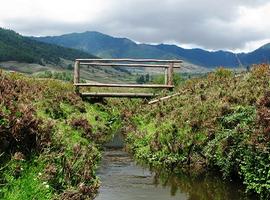 The Phobjikha Valley
The bowl shaped Phobjikha Valley is one of the most famous scenic spots in West Bhutan. This is due to the great opportunities for gentle trekking, in sight of the Black Mountains, and also because the valley is something of a nature reserve as it is the seasonal home of the black-necked crane from November to February each year. 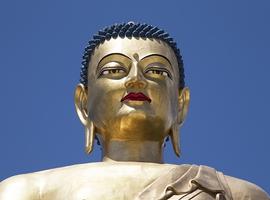 Thimphu
Sitting in a large valley at 2320m, Thimphu is the country's capital and the seat of government. The population of the city is around 100,000 which by UK standards makes it a small town but in a Bhutanese context this makes Thimphu the country's only ‘metropolis'. 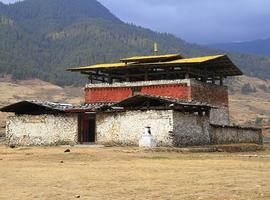 Wangdue Phodrang
In the 17th century Wangdue Phodrang (then known as Wangdi) was considered to be Bhutan's second capital as it commanded an important central position, close to Punakha, which allowed it to control transport routes between the west and the centre of the country.